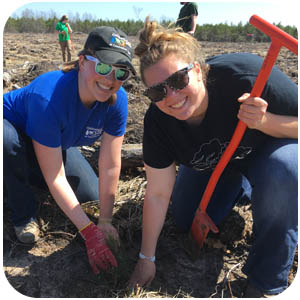 A rare songbird in North America, the Kirtland’s Warbler is highly dependent on the Jack Pine Forests found in Michigan. Jack Pine forests are a unique type of tree that depends on fire as part of its reproductive process. After a deadly fire in the early 1900s, Michigan put a priority on extinguishing wildfires. While this was lifesaving for residents in the area, it prevented the Jack Pines from reproducing, which in turn reduced the places for Kirtland’s Warblers to nest. In addition to a limited environment to breed, the native, parasitic Brown-Headed Cowbird further reduced the population of the Kirtland’s Warbler.

A Kirtland’s Warbler preserve was established in the 1950s to help protect the Michigan population.  In the 1970s a census revealed a population of around 200 pairs, down 300 from the initial census 20 years prior. One of the first species to be protected when the Endangered Species Act was signed into law, the Michigan DNR worked diligently to help this species. They started planting new Jack Pines in a random pattern mimicking life after a forest fire. Management methods to help control the cowbird population were also put in place.

After a small population dip in the late 1980s, the Kirtland’s Warbler’s numbers began to increase, reaching an estimated 2,000 pairs in 2001. That same year, the Kirtland's Warbler Research and Training project began in the Bahamas where the species winters. With over 2,300 estimated pairs in 2019, the species was officially removed from the Endangered Species list in October of that year. Conservation efforts now focus on maintaining a healthy population.

The Saginaw Children’s Zoo is proud to contribute annually to these conservation efforts through donations, volunteering, and advocation!  Consider volunteering as an individual or group to help us plant trees with the Kirtland's Warbler Alliance. 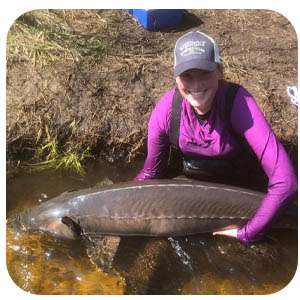 Sturgeon are an important species in the Great Lakes ecosystem. The Saginaw Children’s Zoo is proud to have been involved with the following conservation efforts for this species:

Every winter, a small team of our staff and volunteers go the Discovery Preserve in Bay City to clean Wood Duck nest boxes. Managed by the Saginaw Basin Land Conservancy (SBLC), the Preserve is home to a wide range of wildlife, including Wood Ducks. Wood Ducks nest in trees on or near water. As natural cavities for nesting are becoming scarce, Wood Duck nest boxes provide a safe place for them to breed each year.

Along with SBLC, the Saginaw Children’s Zoo helps remove feathers, eggshells, and old nesting materials from these boxes. The boxes are then refilled with clean sawdust to prepare them for the next season. The nest boxes are primarily located on the water, and volunteers can’t access the boxes until the water freezes over in the winter.

Only staff and Core Volunteers are able to participate in this project with the Saginaw Children’s Zoo. Click here to learn more about volunteering. To learn more about the Discovery Preserve and SBLC, click here. 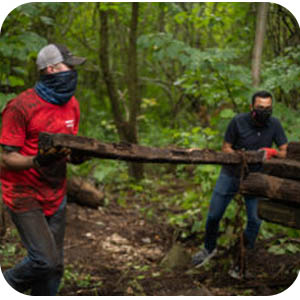 In 2017 The Saginaw Basin Land Conservancy (SBLC) approached the Saginaw Children’s Zoo with the idea of creating a Naturescape for Saginaw. The idea was to provide residents with a beautiful space where they could spend time outdoors and away from city life.

The Zoo proposed the use of an old railroad line on the property to the east of the parking lot as a nature trail, connecting residents on the east side of Saginaw to the vibrant downtown area. In 2018, the collaborative project began! The Zoo set aside the land for the trail and the SBLC went to work fundraising to put it together.

The Zoo Trail is about a quarter mile long, featuring an outdoor classroom and interpretive signage.

We frequently have volunteer groups help maintain the Trail, including removing invasive buckthorn.

Looking for a local spot to get outdoors while giving back? Consider volunteering as an individual or group to help us maintain our Zoo Trail! 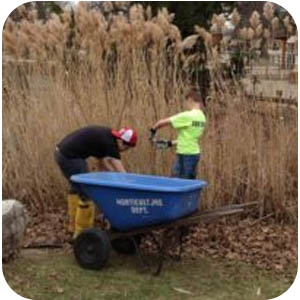 An invasive species is a non-native organism that preys on and/or outcompetes native species for food and other resources. Left unchecked, most invasive species can drastically alter the native ecosystem. There are two major invasive species that we are always on the look out in our zoo and on our zoo trail: phragmites (Phragmites australis) and buckthorn (Rhamnus cathartica).

Phragmites is a wetland grass that can grow up to 15ft. There are many types of phragmites, some of which are native to Michigan. An invasive sub-species of phragmites, thought to have been introduced in the late 1700s or early 1800s, is taking over the Great Lakes shoreline and nearby wetland areas.  Forming dense patches, these plants crowd areas and remove nutrients that other plants and wildlife depend on. As it’s a wetland grass, we primarily find it in our zoo around our pond.

To learn more about phragmite and how to control it, click here.

Buckthorn is a small tree or shrub that can grow up to 25ft. It has small purplish berries, oval shaped leaves, and sharp thorns at the tips of its branches. Originally brought to North America in the late 1800s as an ornamental plant, Buckthorn has spread throughout central and northeastern as well as southeastern Canada. It can form dense patches and outcompete native plant species. We frequently find this plant in our zoo and on our zoo trail.

To learn more about buckthorn and how to control it, click here.